You are using an outdated browser. Please upgrade your browser to improve your experience.

a report finds BY FANG BLOCK

U.S. home prices have enjoyed a six-year growth streak since the market bottomed out in 2012, as February reported the largest year-over-year increase in four years, according to a Redfin report released Thursday.

The report doesn’t break out data about luxury segment.

Home prices across the country have risen for 72 straight months, boosted by an imbalance between strong demand and low inventory, Redfin says. 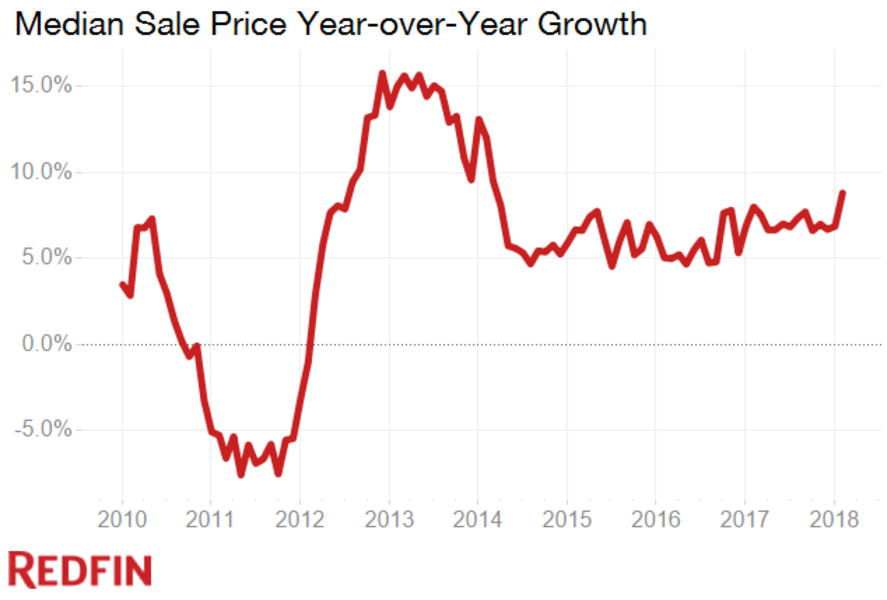 There were 607,800 homes for sale in February, a 11.4% decline from a year ago and marking the 29th consecutive month of shrinking supply on an annual basis.

Rushed by rising mortgage rates, which reached the highest levels in nearly three years in February, buyers snapped up homes quickly when they became available.

On average, it took 53 days for a typical home to find a buyer, a week faster than in February 2017. Additionally, 21.1% homes were sold above their asking prices, up from last year’s 19.6%.

Across the 73 metro markets Redfin tracks, all saw price increases in February, with six reporting double-digit growth. San Jose, California, had the highest price growth, increasing 34.1% year-over-year to a median price of $1.18 million.

Seattle was the fastest-moving market in the U.S., with half of all homes available for sale entering into contract in just eight days, compared to 12 days a year earlier.

Nationwide, the number of sales were largely constrained by a lack of supply. A total of 166,100 homes changed hands in February, edging up just 0.4% compared to last year, according to Redfin.

When you actually live in Aspen, you have all the time in the world to go on new excursions every day. You have access to an exciting lifestyle that is all yours, all year long.